A Beginner’s Guide to BEP-20 Tokens 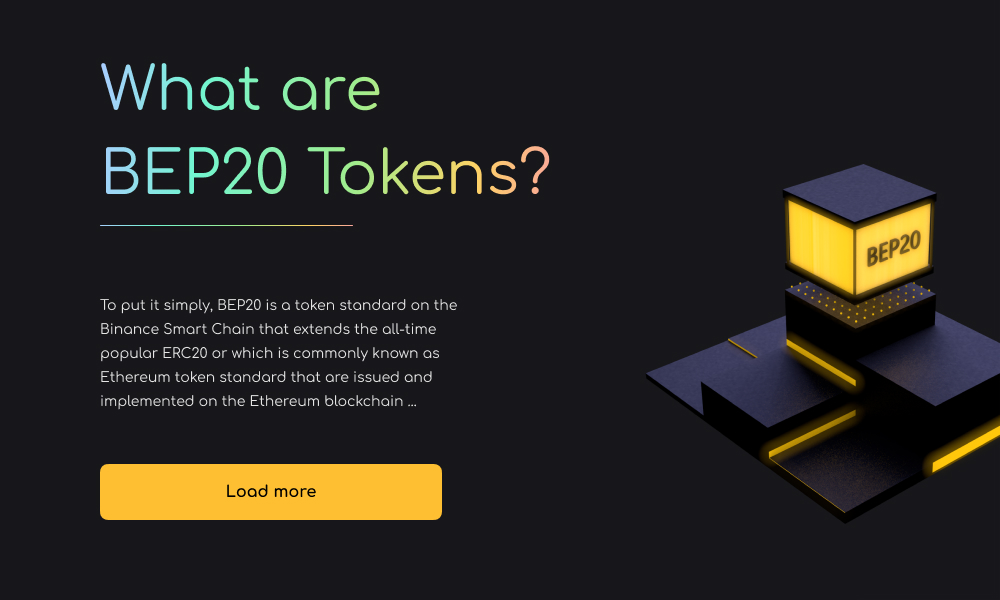 BEP-20 token standard extends ERC-20, which happens to be one of the most common Ethereum token standard. A token standard such as BEP-20 can be thought of as a blueprint for the tokens that are going to be created on a blockchain network. This blueprint helps define how the tokens created can be spent, who can spend these tokens and other general rules for their usage. Given BEP-20’s similarity with Binance Chain’s BEP-2 and Ethereum’s ERC-20, it is compatible with both the blockchain networks.

The main motive behind the creation of BEP-20 was to conceive a technical specification for Binance Smart Chain, which would help the developers with a flexible format for launching a range of different tokens on Binance Smart Chain. These tokens could represent anything from dollars stored in a bank (also referred to as stablecoin) to shares in a business.

In addition, developers have the option to create a native asset as a BEP-20 token or even peg tokens from blockchain networks in order to make them usable on Binance Smart Chain. This mechanism helps create what are called Peggy coins, which are basically just a BEP-20 version of other cryptocurrencies such as LINK or XRP.

Similar to the native Binance Chain and BEP-2 tokens, the BEP-20 token transfers are also fueled with the native token of Binance known as BNB. This mechanism motivates validators to include the transaction in the blockchain, as they’ll collect the BNB as a fee for their troubles.

As discussed in our previous blog, a lot of emphasis has been put on the cross-chain compatibility of BEP-20 tokens. One of the main reason behind that is because Binance Smart Chain was envisioned as an extension to Binance Chain. Later, however it became a separate blockchain network, but the architecture is pretty much similar to that of native Binance Chain.

So Binance Smart Chain works to facilitate decentralized applications without congesting the native chain. So this cross-chain compatibility ensures that BEP-2 tokens can be easily swapped with BEP-20 tokens. Binance Chain Wallet extension offers an easy way to carry out this swap, however many more methods are to emerge in the near future. We at Netheru, are utilizing Binance Smart Chain as a host for our decentralized marketplace for personalities. For this purpose, we are going to utilize BEP-20 token standard for our native tokens.

These tokens will then be pegged to NFTs of the personalities that are going to be listed on our network. In the articles to come, we will explain in more detail as to how to purchase these tokens and how Binance Smart Chain is facilitating us.